Why are there any plot points? It is one of the best known Aristotelian techniques in script theory, which turns out to be that strong, more accentuated scene that promotes a break in the character’s story and journey. And there are hundreds of theories around its concept, use and function. Now, with a new theory of narrative, a science of the script itself, a semiotic of the character, it is possible to have a study of its own for this aspect of the narrative, in which the plot point is generated and conducted by the character.

Every screenwriter studied that the plot point, the famous plot point, are the scenes of great dramatic accent, used to promote a plot twist, an incident, or event that interrupts the continuity of the story and not the narrative. Syd Field has well structured the role of the tipping point at the action level. But, at the character level, Field said that there was still no theory to reach the characters ‘souls, their internal structure, considered “invisible”, and that describing the characters’ soul was like “describing the sun on a cloudy day”.

Now, we can add to your structural studies of these strong scenes, the tense peak that shakes the characters’ souls. The contractual narrative foresees a theory only for the plot point, called, in tension semiotics, “extraordinary events”. These peaks of tension in the narrative, which change the course of the story, are called extraordinary if they are “concessive”, unforeseen, under the impact of the surprise that affects the character. The plot point is only important if it is elaborated from the point of view of both the action and the passions of the characters.

This unforeseen plot point, which shakes the character’s cognition, causing an interruption in his journey, will modify the character and the narrated story itself, taking another unexpected direction.

The two turning points, in the “Joker” script, occur according to the Aristotelian norm, also with tense events, which close each episode. The extraordinary tense event, to promote Arthur’s plot point, occurs in the wake of the subway, when he shoots and kills the boys. It is a tense scene, which deeply shakes Arthur. After this event, he goes out modified, dances his victory then, gains power, thinks that he no longer needs to take medicine. That was his transformation from the first to the second act, due to this scene that happens without being anticipated, and that will promote the turning point in the story and in the character, ending the first act, when all the contracts between the characters have already occurred.

The second plot point of “Joker”, which will promote the change from the second to the third act, will occur when, in the scene, with two thirds of the time of the film, Arthur kills his own mother, by surprise, in an unexpected action. This scene is tense, extraordinary, the character acts without thinking, Arthur will go into a state of shock and will be modified again. After this scene, Arthur no longer seems to lose control of what he “feels” when preparing for his final show, totally modified, with the power to continue killing without feeling remorse or guilt.

The “point” as surprise and sensation

The main characteristic of the plot point is that it occurs in the form of surprise and concessive events. The concessive is the opposite of the implicative, what was expected to happen and happens. The concessive is what changes the course of the story due to the changes that the character undergoes, because during this event there will be a “damage” in his soul, a “fracture”, which will then ask for an end to the suffering caused by this event.

The plot point of the “Parasite” script, from the first to the second act, occurs with the scene, which comes unexpectedly, of the former housekeeper ringing the mansion’s bell, taking the family by surprise, who enjoyed the luxury of the house . The scene of the turning point is not the one that closes the first act, as in the script for “Joker”, but the one that starts the second act, the arrival of the housekeeper. Until then, events were correlated to contracts.

The scene of the housekeeper’s arrival surprises the viewer and the characters in the story and, therefore, is tense. She interrupts the entire journey of the four characters, with her plans, until then, running perfectly. The surprise is the breakdown of the expected, which breaks with the implication and opens a concession for the unexpected to happen. It changes the course of history. From this scene, what was a comedy will turn into drama and tragedy.

The second plot point of “Parasite” occurs in a scene on a sunny day at the mansion, when the family, at the bottom of the well, after losing everything they owned, receives a call from the rich family, as if nothing had happened in this second act , inviting them to the son’s party at the mansion. Out of nowhere, by surprise, reopens a new chance for everyone to recover their broken rhythms, and return to the contracts that existed until the end of the first act.

The scenes of the plot points in “Parasite” differ from those of “Joker”, because the tense scenes of “Joker” occur at the end of the act, at the end of the first act, when he kills young people on the subway, and at the end of the second act, when it kills the mother. While in “Parasite”, the scenes that promote the plot points occur at the beginning of the acts, the second and the third. The scene that opens the third act is tense, the characters act surprised when they are treated by the bosses normally, and will return to work shaken and modified after the events of the second act.

The plot point here exposed as an “extraordinary event” has been refined since the 1990s. In the book “The Passions in the Characters” and in the Screenwriter Online videos, I develop a long theory around this narrative logic, considered scientific in the largest universities of the world.

Hermes Leal is a writer, journalist and filmmaker, Master in Filmmaking and PhD in Letters and Linguistics, in the field of French Semiotics, and author of the en.screenwriteronline.com method for writing screenplays. 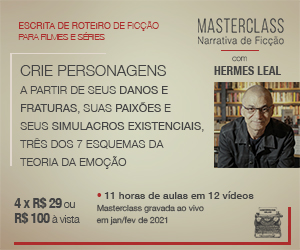